This video is done so well that I had to share (5 million of you would have already seen this!). Maybe some would call it a security threat, but it makes people happy so I’m all for it!

P.S What I love is that whenever Psy performs this song in the West, be it in the U.S. or Australia (we loved him down here) he doesn’t change the lyrics to English but keeps the orginal Korean lyrics. I’m all for diversity, and promoting the learning of other languages. It can only enrich your life!

Who wouldn’t want to go on an helicopter ride here? 😛

Kazakhstan has changed dramatically in the last decade, mainly thanks to its president Nazarbayev. Sure, this authoritarian ruler could be called crazy by some as he puts on sham elections whenever he wants just so he can test his official’s loyalties and put on a show for the press. Few are willing to challenge his rule, and many praise him for stability and economic growth even though the gap between the rich and poor is still quite obvious. He has however, done a good job of trying to put Astana on the world stage. Using the wealth derived from oil and gas deposits in Kazakhstan, Nazarbayev has enlisted some of the best architects in the world to build unique and mightily impressive buildings for his new capital.

Check out the tower below called Baiterek. From the top of the tower you have 360 degree views, a bar serving cold Turkish beer, and best of all (insert a little bit of sarcasm here) on the observation deck you will fina a malachite pedestal which holds a 4.4 pound slab of solid gold, which in the centre you can see the presidents right hand print. Visitors are encouraged to make a wish before placing their hand on the imprint, and IF you are lucky enough, the national anthem might start playing (said to have been written by the president himself). I’m also assuming that this means that your wish will come true thanks to the magical President himself! Who knows, maybe he will be your fairy godmother for the day or night? 😛

In all honesty, I would love to visit this place. It just seems like the whole idea of this city was built upon the whimsical dream of President Nazarbayev. Also, considering that Kazakhstan is one of the least densely populated states on the planet, the natural beauty of the country would be extrodanairy. Below are some photos to stir your imagination 🙂 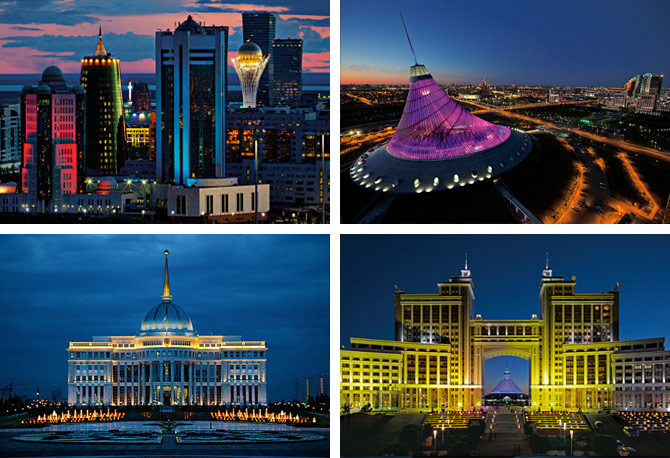 Above: Astana at night. Photo taken from http://ngm.nationalgeographic.com/2012/02/astana/ludwig-photography#/07-astana-grid-670.jpg Photo taken by Gerd Ludwig 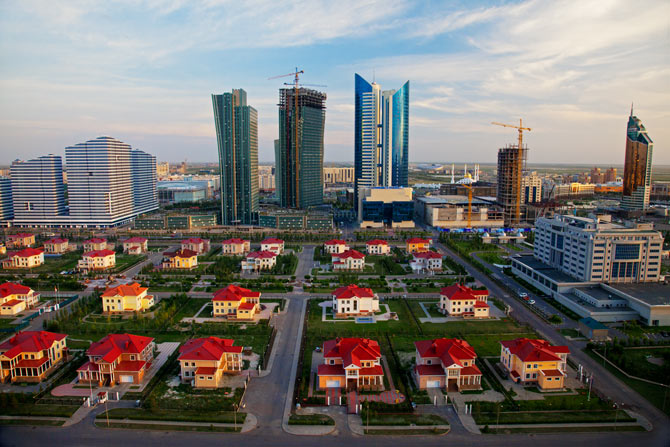 A newly built suburb in Astana. These very american style houses look so out of place. However, it seems that everything in Astana is built for the purpose of standing out. Very eclectic to say the least. Above: Astana at night. Photo taken from  http://ngm.nationalgeographic.com/2012/02/astana/ludwig-photography#/11-american-like-mcmansions-670.jpg Photo taken by Gerd Ludwig 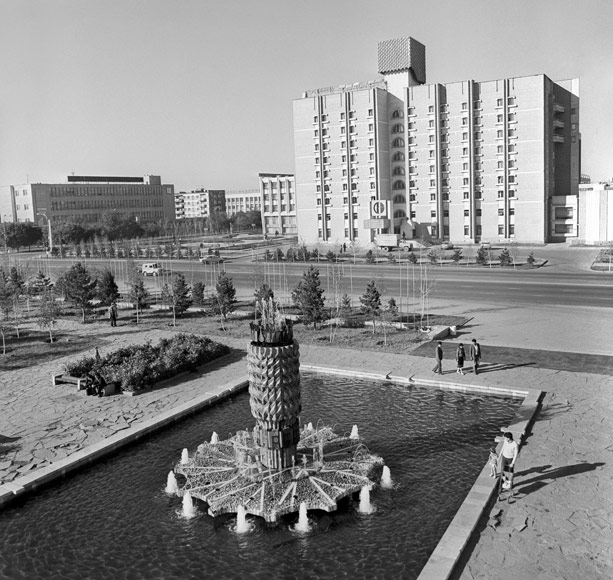 The photo above is the city of Aqmola. The name was changed to Astana in 1998. As you can see not only the name changed but also the landscape. Once a city on the fringe of Kazakhstan, it has been totally revolutionized.  Photo taken from http://ngm.nationalgeographic.com/2012/02/astana/ludwig-photography#/02-black-white-astana-670.jpg Photo taken by M. Chumin 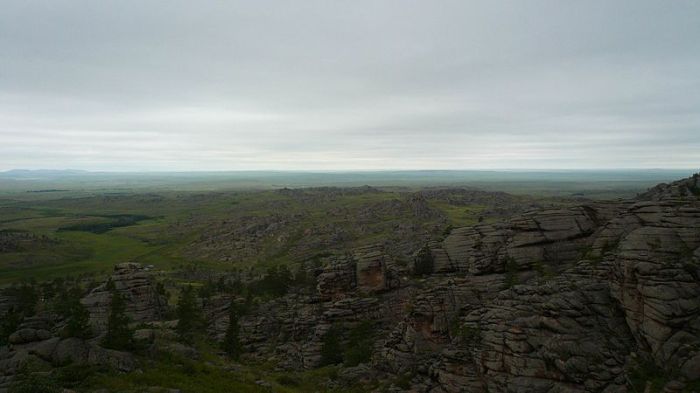 The photo above is landscape of Bayanaul National Park.

Photo above taken from http://travel.nationalgeographic.com/travel/countries/kazakhstan-guide/.

Strangely enough, when I looked up Trip Adviser  there’s actually quite a few hotels in Astana that have been reviewed! Who would have thought…  So who’s up for an adventure?

Don’t forget to like my page on FB, many more random, funny and exotic bits and pieces found there! https://www.facebook.com/missworldsec

It’s one of my dreams to visit Greenland. Why many would ask? The pristine beauty for starters, as I love being close to nature in it’s most ‘purest’ forms. Secondly, for the pure adventure of it! Travelling somewhere so far away (from Australia it’s a bit of a treck) to place most people have never even considered. Check out this gorgeous and epic short movie photographed and edited by New Zealander Richard Sidey. Watch it in full screen if you can, just to be able to take it in just that little bit more!

Another video I love, is one made by the I Love Greenland team (their FB group is worth checking out). They show us how to make a ‘Greenlandic Coffee’. I’d def go just for the coffee experience 😛

In Greenland they have something called ‘Kaffemik’ – a Danish word that means a social gathering where Greenlanders gather around a cup of coffee (and maybe some other treats like cake and sweets*). I find it so interesting that even in this part of the world, so far away from most, you can connect to people you would have thought to be so ‘foreign’ and removed from your regular lives, over something so simple and familiar to us as coffee. I think that’s such a simple yet profound thought!

Here are some random pictures I thought you might enjoy!

This is a photo of Nuuk airport. I love that Air Greenland’s planes are RED! (My favourite colour :D)

The photo of a runway is taken at Narsarsuaq. Another fun fact is that in order to get to many of Greenland’s towns, you have to either sail or fly by plane as their isn’t always roads connecting towns.

There was also talk that after the 2nd World War (if not before it as well) the U.S. wanted to acquire/buy Greenland from Denmark, for the purpose of air bases I suppose. Denmark however refused. The U.S. oddly enough however does have an airbase in Greenland – Airbase Thule. It is the U.S’s most northernmost base and was established in 1943 in order to give the U.S. weather information and signals (thought to give them an advantage over the Germans in regards to air attacks). There isn’t to much info out there about this, but oddly enough there is a page on it on wikipedia (if you’re interested – http://en.wikipedia.org/wiki/Thule_Air_Base) Kinda crazy huh?

I seriously cannot wait to visit! Don’t be surprised if there is more posts on Greenland in the future! Do you wish to visit any ‘quirky’ or less known countries?

> Or Hillary Tensing Airport (Lukla Airport was re-named in 2008, but most people still refer to it as Lukla)<

I found some pictures and information about this airport today, and wow talk about flying/landing at new heights… This airport is at an elevation at 2800m. The landing strip is only 450meteres in legnth and UPHILL,  halfway up a cliff face. Apparently in hiking season it is a very busy landing strip, seeing as many as 50 flights a day. It  is located at the base camp of Everest and the views are spectacular. The flight from Kathmandu to Lukla takes 35 minutes and would be amazing and a once in a lifetime trip. I have a feeling I would get quite nauseous at the realisation how huge and high these mountains are. Actually, I’m getting nervous just thinking about it now. I can’t seem to comprehend the massive-ness (not a word, I know, but it should be!) of the landscape.

Smh also did a report on the airport, and notes that Intrepid Travel runs 15-day Everest Base Camp treks out of Kathmandu. $1230 a person includes staying in mountain tea houses and Kathmandu hotels, guides, porters and return flights from Kathmandu to Lukla(http://www.smh.com.au/travel/activity/active/up-up-and-afraid-20120907-25i7n.html). TEA HOUSES?!? I am a huge tea fan, so the thought of going all the way ‘up’ there for some tea (ok and some hiking I suppose) not only amazes me but also inspires me to do so. Apparently in the Himalayas they produce and grow black, green and white teas. The image below is of the Antu tea plantations nestled between the Himalayan mountains. So who’s game? 😛 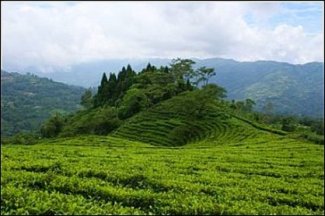 Keep watching till the end!