This is a photo of a sunset on Mars. Awesome huh? Makes you feel so small when you realize how big the universe is… The photo was taken by NASA and you can find more info here http://www.nasa.gov/multimedia/imagegallery/image_feature_347.html    This is what they say about the sunset –

“On May 19, 2005, NASA’s Mars Exploration Rover Spirit captured this stunning view as the Sun sank below the rim of Gusev crater on Mars. This Panoramic Camera mosaic was taken around 6:07 in the evening of the rover’s 489th Martian day, or sol.

Sunset and twilight images are occasionally acquired by the science team to determine how high into the atmosphere the Martian dust extends, and to look for dust or ice clouds. Other images have shown that the twilight glow remains visible, but increasingly fainter, for up to two hours before sunrise or after sunset. The long Martian twilight (compared to Earth’s) is caused by sunlight scattered around to the night side of the planet by abundant high altitude dust. Similar long twilights or extra-colorful sunrises and sunsets sometimes occur on Earth when tiny dust grains that are erupted from powerful volcanoes scatter light high in the atmosphere.” 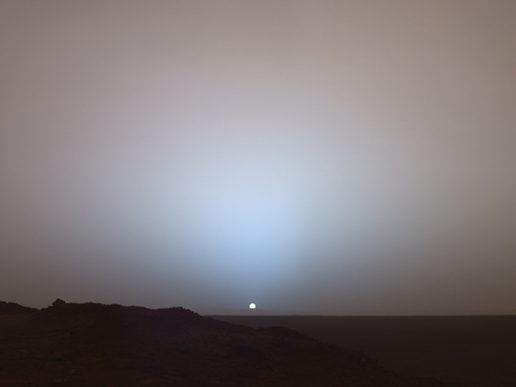 4 thoughts on “Sunset on Mars”