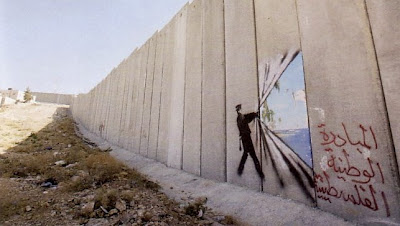 I came across this graffiti whilst browsing the web, and it looks very much like the wall dividing the West Bank and Israel. Many of us don’t think about the way that basic supplies like food and water can be used as bargaining tools in conflict zones. The West Bank depends on water deliveries made by the Israelis. It seems rather bizarre doesn’t it, that the palestinians would have to depend on their ‘oppressors’ for water… Water is most definitely a symbol of life and in this case, freedom.While many agencies and NGO’s would be monitoring Israels deliveries of water into the west bank in order to ensure that they are ensuring the basic human rights of water and food for thousands of people, Israel can still strategically benefit from this in numerous ways. For instance, by not allowing the Palestinians to build their own water infrastructure  and by not allowing them to reach the source of the water so that they continue to be dependant on the Israelis (and this way they also don’t build ‘permanent’ infrastructure which cements their presence in the West Bank). For more information and an overview on this complex topic visit http://www.amnesty.org/en/news-and-updates/report/israel-rations-palestinians-trickle-water-20091027. With more conflict currently unfolding, it is another sad example in which people who hold a position of power over others, exploit this position and hurt other human beings. I do believe that consequently both sides suffer. I thought that it might also be beneficial to include a map of Israel and the West Bank so you can get an idea of the geography and picture how the West Bank is enclosed by Israel (and how far away they are to water sources). Also, if anyone knows what the Arabic writing says, I’d be interested to know! Until next time Miss S.

Image below taken from http://lawrenceofcyberia.blogs.com/photos/maps/un_westbankmap_2007.html.